Praz sur Arly will be celebrating the 80th anniversary of its ski area throughout the coming winter season! It’s an occasion for us to relive this incredible adventure through exhibitions and numerous events. As a pioneering ski resort, Praz sur Arly inspired many experiments and inventions which contributed to the development of skiing in the Alps (rescue sledges, children’s snow classes).

Creation of the Combe Noire tow. It was the first tow in the Espace Diamant, dreamt up by the people of Praz. In less than 10 minutes, thanks to a 4-cylinder Renault engine, a cable with a winch system pulled the skiers up the slope (max. 5 people at a time). Praz sur Arly’s Roger Sylvand installed the winch and he was also the inventor of the rescue sledge.

10 years later, the installation of the first proper ski-tow on the Combe Noire.

In March 1950, for the first time in France, children went off to snow classes… in the village of Praz-sur-Arly. This took place from 9 to 30 March 1950 in the “Bambinos” chalet, later called the “Val Soleil”. This “first” figures in the book of inventions. It was a revolutionary formula at the time: the whole class moved to a holiday centre for three weeks. The idea came from a teacher, Miss Müller de Schongor, and Mr. Lorphelin, Director of the Victor Hugo School in Paris, and his wife.

First ski-tow liaison with Flumet, in the Espace Val d’Arly.

2005  Creation of the Espace Diamant

+ DECORATION OF THE VILLAGE all winter: the shops, hotels and private renters will decorate the village around the theme of skiing and the ski lifts.

+ EXHIBITION all winter: “80 years of the ski lifts” IN PHOTOS at the Tourist Office and an exhibition of monumental sculpture honouring Louis Chabaud, Praz’ pioneering outsider artist and sculptor.

+ PHOTO COMPETITION all winter: take a photo of yourself in the photo frame at the bottom of the Crêt du Midi chairlift and participate in the competition for the best shots.

+ NEW YEAR’S EVE PARTY, Monday 31 December 2018: bring in the New Year in style with a DJ, fireworks and a fancy dress competition on the theme of the 80th anniversary of our resort. 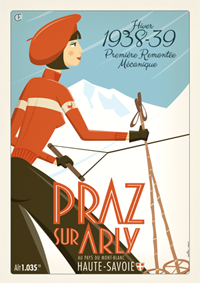 In the evening: torchlight descent, retrospective in images of the history and principle actors of our resort, fire show with the Fuegoloko Company, anniversary cake for all and fireworks!

> Buy the “80th anniversary of the ski area” collectors’ poster

+ THE TOWN COUNCIL’S CUP, Sunday 31 March 2019: the locals and holidaymakers, big and small, are invited to participate in the Town Council’s Cup, a not-too-serious one-run giant slalom.

Two new competitions for the 80th anniversary: an obstacle race on snow and a yooner challenge. Fancy dress strongly advised!