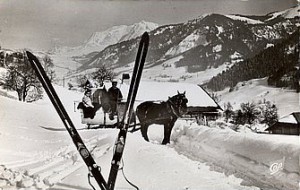 The history of Praz sur Arly:  Nothing seemed to disturb the calm that reigned around the farms of La Thona on that morning in February 1375. The farmers of La Thona (La Tonnaz today) were the first inhabitants of Praz sur Arly. They logically built their farms on the sunniest, south-facing side of the valley. There were still only a few houses but the deforested areas clearly reflected a desire to expand. Under the snow lay cleared land that would be arable by the return of spring.

Life flowed by gently in this hamlet dependent on Megève. Over the years, people moved around and other farms emerged. Réon (Rayon at the time) was the second hamlet built on the present site of Praz sur Arly. Then came Le Pratz, the centre of the village today.

The XVIIth century saw the construction of chapels (Tonnaz in 1600 and Pratz in 1643) followed by a church, built in 1696: the Mary Magdalene Church, which is linked to the parish of Megève. Thus Le Pratz continued to grow, with its ideal location on the much frequented road to Italy.

In 1779, a school was founded by five individuals from Megève. That same year, a census gives a fairly accurate idea of the number of inhabitants. An official document mentions the gabellans (subject to the tax on salt or "gabelle") in Praz. They are 51 in La Thonnaz, 28 in Réon and 29 in Le Pratz de Megève - hardly more than a hundred souls living on agriculture and cattle breeding, in particular foals.

On June 14, 1860, the people of Praz were definitively French but were still "Megevan". Yet they had sought their independence in 1834 already. Megève was, quite naturally, opposed. The differences were numerous, especially about the drawing of the boundaries between Pratz and Megève.

In 1869, Pratz finally obtained its independence, with a boundary which was not in Megève's favour. An imperial decree, prompted by political differences between the imperial administration and Megève...

In 1907, at the request of the Town Council, and by Government decision, Pratz de Megève became Praz sur Arly, a decision aimed at definitively separating Praz from Megève although the village had always been called "Pratz de Megève". 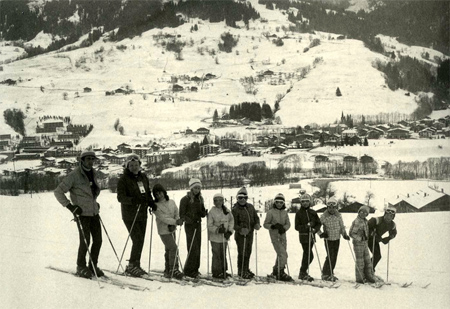 
In March 1950, for the first time in France, children went off to snow classes... and it happened in Praz-sur-Arly.


The idea came from a teacher, Miss Müller de Schongor, and Mr. Lorphelin, Director of the private Victor Hugo School in Paris and his wife.

Children nowadays can enjoy ski classes and a multitude of leisure activities, but at that time students had classes all day. They could only do a few runs in their sledges around the chalet or make snowmen outside school hours.

The golden age of the snow classes began in the 1970s. Many variants of "transplanted" classes have since been developed: green classes, snow classes, discovery classes... This form of tourism has a major positive impact on the economy of resorts. 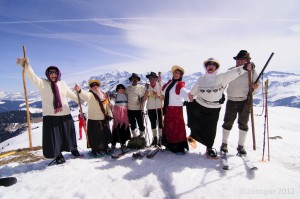 The smugglers: When the Savoy became French in 1860, a free zone, exempt from taxes, was created. Praz-sur-Arly formed part of it. The boundary of this area was the limit with Flumet. The inhabitants then organized a vast smuggling network with the rest of the Val D’Arly. Praz-sur-Arly, at the edge of the two departments newly created by the Annexation, was ideally placed on the boder line of the area. The ridges overlooking the village were all possible passages for the flow of goods, resold up to six times their purchase price. Anything and everything was good for this lucrative trade: of course, the traditional "tobacco, coffee, sugar" brazenly crossed the border; but also matches, livestock, poultry, clothing, haberdashery articles and construction materials.... Those who were in this envious situation engaged in a dangerous but successful traffic around the border lines: the smuggling was well organized and considerably improved the rather frugal existence of the inhabitants of our harsh mountainous land. In 1923, France put an end to this privileged situation enjoyed by Northern Savoy by eliminating the free zone and reinstalling customs offices on the borders of the State. So, as far as the Val d'Arly was concerned, smuggling had no more reason to exist, the Alpine chalets resumed their role as precarious shelters for pastoral life; the time of hiding places for junk to sell on the other side of the border was well and truly over. The steep slopes became peaceful again and the smuggling paths were turned into ski slopes, now generating legal profits. 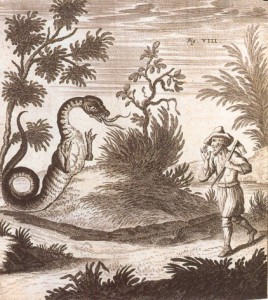 The Tirecorde Legend: It was a spring morning. A shepherd who went out to the fields with his animals returned much earlier than usual. He was breathing very heavily and everyone wondered what could have happened to him. The strangest thing was that, despite running, he was pale and not red in the face as one might have expected. The man had difficulty recounting his misadventure. Then he finally managed to explain his incredible story. Just as he arrived in the meadow, a dragon with foaming nostrils and fiery eyes attacked his herd and devoured several sheep. That the shepherd had survived was a miracle. At first the inhabitants thought the man had gone crazy. But after checking, they had to admit the unthinkable: a dragon was living near Nant-du-Cheval.

Ha!, the dragon wasn't stupid, far from it. The place was lush, the torrent was generous and the game was abundant there. It was also on the road to Megève and the monster didn't mind a juicy morsel of a lost traveller or a foolhardy peasant from time to time.

One evening, the villagers assembled again. Old Muffat, one of the biggest cattle-breeders of the village, complained about all the animals he had lost over the season. Many others complained, except for old Father Grosset. He too had lost animals, and even a shepherd, but he would never have shed tears over a Muffat. It must be said that old feuds opposed the heads of the two largest families of the valley. They each had their own idea of how to get rid of the dragon but none seemed worthy of interest. No one really wanted to take the risk of having to put into practice a possible good idea. However, only the two major clans of Le Pratz, the Grossets and the Muffats, could hope to muster enough people to face the monster. The two family heads knew that well but didn't dare to take the lead, certain that the capture of the beast would give the clan immense prestige far beyond the Val d'Arly, but failure would make them the laughing stock of the entire population. The other villagers were enraged and eventually got angry. After lengthy discussions, it came to an almost inconceivable result for the people of Pratz: Muffat and Grosset formed an alliance and decided on a mutual plan to kill the dragon.

Thus, one beautiful afternoon at the beginning of winter, the boldest men set off to Nant-du-Cheval. The men had courageously thrown braided cords the previous days and managed to ensnare the animal by the neck. They pulled with all their might to strangle the dragon. The dragon struggled and heaved in all directions. Despite the blows of its claws and its desperate fight, the men got ever closer to the Arly River flowing below. In a final effort, the group of men succeeded in unbalancing the beast and sent it tumbling into the tumultuous waves of the river. The torrent engulfed the terrible dragon and it perished and drowned. Today, no one believes in the existence of dragons. But as you leave Praz-sur-Arly, near a small stream which separates the village from its big neighbour Megève, one spot has a strange name that always intrigues passers-by: "Tirecorde."
Historic site and monument

The neo-Gothic church of Praz sur Arly is located in the heart of the...

The village of Praz sur Arly was originally made up of three hamlets,...

Situated in the Commune of Flumet, on the border with Praz, on the road...

The farm of death

Painter and sculptor, Louis Chabaud settled in Praz in 1972 in this...